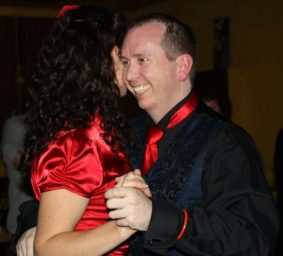 Ian Caughley found swing dancing in the year 2000, and has been actively involved with Swing Patrol ever since. He danced for years in the performance troupe Scat Pack (precursor to Harlem Shout) and was one of those leads who helped out in multiple performance ball routines, so there are countless followers in the community who count him as their first performance partner. For a long time the focus of Ian’s dance passion has been Balboa. He has travelled interstate and overseas to Balboa dance camps – Balboa Rendezvous, CalBal and to every one of a dozen Balboa On The Rivers in Brisbane, where he was two-time winner of the Spirit of Balboa (people’s choice award.) He has been a popular guest teacher at Swing Patrol’s Club Maxie’s. One of Ian’s primary goals as a dancer is to make his partner smile or laugh … a priority he is excited to bring to the Level 1 class at Richmond Balboa in 2018.