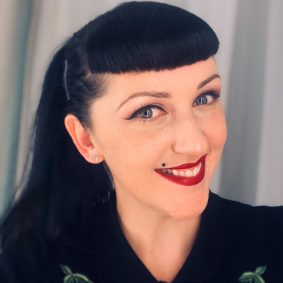 Noni Healy (Noni May Clarke) is one of Melbourne’s most experienced and respected swing dancing teachers, having established an impressive array of credentials teaching all over Australia and internationally.

Noni first started swing dancing in the year 2000 and became instantly passionate about the opportunities dancing afforded for self-expression and creativity, and grateful for the chance dancing brought to meet a variety of new and exciting people.

After becoming a teacher in 2003, swing dancing has taken Noni to places such as New Zealand, South Korea, Herrang (Sweden), and nearly every city in North America. She is now a world-renowned teacher, who focuses on teaching conceptually, dancer rapport and breaking down the subtleties of technique whilst maintaining a fun and vibrant attitude. At the core of Noni’s teaching philosophy is the need to make even the most complex ideas accessible. She excels in a number of swing dancing disciplines, including fast lindy, aerials, balboa, blues, Charleston, and solo jazz.

Learn Drag Blues in this progressive workshop for all levels.